Mask on Your Face

Bored? There’s a whole internet full of public domain and Creative Commons material for you to remix and make into “viral” (pun indended) videos.

My husband was so preoccupied with whether he could, he didn’t stop to think if he should.

A visit to the embassy

Pictures represent the South Korean, Spanish and U.S. Embassies in Stockholm.  Guess which one is the U.S.?

Last week we went to the U.S. Embassy in Stockholm to renew our son’s passports.  Besides the building being the ugliest one on Embassy row, it’s also the most boring place to spend a weekday morning.

After waiting outside for quite a while (we were lucky it was a sunny day – must be awful in rain or winter), they take away all electronics in the guard booth, so when our appointment for a passport took over an hour, my husband couldn’t call his work to let them know he wasn’t coming to his scheduled meeting.

You are also subjected to this awful video on re-run with about 100 people saying “I am America” over and over and OVER AND OVER!  I’m sure it was a cute idea to the person who made it, but the two places I have to watch this video are waiting an hour for my passport at the embassy and while waiting to go through customs when entering the U.S. (also at least an hour while standing).  Their cutsey “I am America” 5 minute long video gets pretty old after the sixth viewing, not to mention the 20th and 30th viewings.  You look around at your fellow waiting room or line sufferers and think “Why didn’t they film this instead?  It’s way more realistic.”

My husband suggested we pick up some reading material on the shelf while we waited.  I walked over to the shelf and said, “Which would you like?  The Swedish phone book or the Redbook from 2005?

Remember what it was like to sit in a waiting room for over an hour WITH NO PHONE?!  I tell my kids we’re time-traveling to the past when we have to go to the embassy.

C’mon embassy!  At least put on some American T.V.  “Good Times” or “America’s Funniest Home Videos.”  Serve Dr. Pepper and chips with salsa.  Leave out Enquirer magazines and beef jerkey.  THIS is what we need to represent. 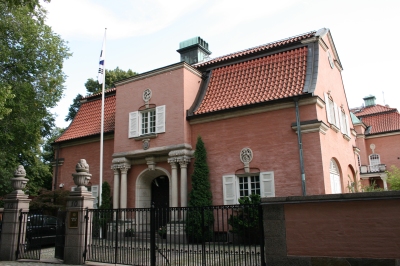 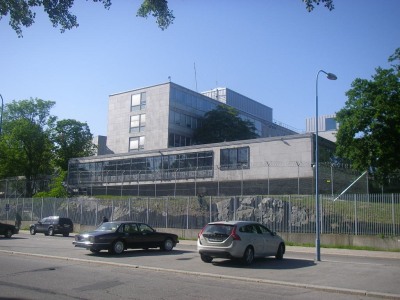 I’ve been trapped in the house for a week now.  I’ve noticed when you don’t get outside, your world gets a bit smaller.  Today I will entertain you with the very important issues in my life right now.

Now at the top of the soup list is Campbell’s Chicken Noodle.  Unfortunately this is not sold in Sweden and I only had one can from the states.  It was much appreciated.  Just the right levels between liquid and solid.

Next is the Swedish military pea soup. Always a popular sick meal around here.  While I do enjoy the pea soup, I wish there was an option of “less pork” or whatever it is they put in there.  The can reads, “Extra mycket fläskkött!”  I used to look for the can that didn’t say this.  I figured if you labelled a can as having “extra,” then there must be a normal version.  I mean, how can it be extra if there was never less in the can to begin with?  This always bothers me.

Today is the tough decision between Chicken Carribean and Forest Mushroom Soup.  I think Forest Mushroom is going to win because it has better packaging.  Will this improve the quality of the soup?  I know everyone is anxiously awaiting the results.